Title: Walking the Darkened Path
Series: Walking the Roads of Easter (Good Friday)
Scripture: Luke 23: 1-49
Theme(s): Walking the right path even in the face of adversity 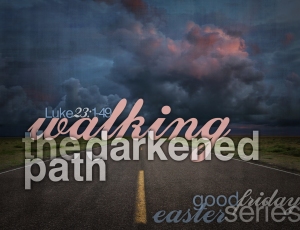 INTRODUCTION
On Good Friday, Jesus chose to walk a darkened path. He walked a path through hatred, selfishness, politics, deception, and jealousy.

HE WALKED WITHOUT COMPANY
• Greeted like a champion on Palm Sunday and days later ignored.
• Shunned and condemned by the religious leaders of the day, the very people who were the supposed followers of the Father.
• Betrayed by Judas, a close confidant.
• Abandoned by the disciples, His closest followers.
• Denied by Peter, one of the “inner circle”
• Passed over by the crowds when they shouted for His life in exchange for Barabbas’ pardon.

We have all known the shock of betrayal, the wounds of denial, the stigma of being shunned, the pain of abandonment, and the utter loss of being passed over for another.

HE WALKED WITHOUT BLAME
• Accused falsely of instructing other to not pay their taxes. The religious leaders knew that Rome did not care about their petty religious squabbles, but taxes, money, that was a different matter.
• Pilate did not find any fault with Him and passed Him on to Herod.
• Herod could not find any blame, but used Him to gain favor with Pilate (v. 12). He was used for political gain.
• He was released by Rome, but condemned by Israel
• Sold for one criminal, and hung between two others.

HE WALKED WITHOUT COMPLAINT
• He never boasted or bragged about who He was or what He had done.
• He answered the questions simply and directly, and later gave up answering at all.
• They mocked Him and mistreated Him.
• They sold Him in exchange for the life of a known terrorist and murderer (v. 18).
• He asked for their forgiveness, not their punishment (v. 34).
• They stole His possessions and gambled them away (v. 34b).
• He was insulted and ridiculed (v. 35).
• He showed compassion to others when He was receiving none Himself (v. 43).
• He was innocent and everyone from Pilate (v. 14) to the common soldier (v. 47) knew it.

HE WALKED WITHOUT SUPPORT
• No one defended Him, even when He defended others.
• No one supported Him, even as He lifted others up.
• No one protected Him, while He was protecting all of us.
• Pilate had a chance and gave in to social pressure (v. 22).
• Herod could have stopped it but chose the easier and more acceptable way (v. 11).
• The crowds followed after Him but did not lift a finger (v. 27). They wept for Him, but never argued for Him.